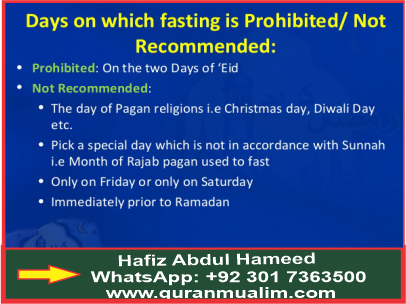 The two days of ‘Eid

All scholars agree that both obligatory and voluntary fasting are prohibited (ḥarām) on the two ‘Eid days. ‘Umar reported that Allah’s Messenger forbade fasting the days of Fiṭr and Adh∙ḥā.  (Al-Bukhāri and Muslim)  There are other sound hadiths with similar wording.

The Prophet  also prohibited fasting every day of the year without a break, saying, “One who fasts always has not fasted.”  (Al-Bukhāri and Muslim)  By not fasting on the days of ‘Eid and days of Tashreeq, a person has complied with this prohibition.

The days of tashreeq

These are the three days following ‘Eid al-Adh∙ḥa, the 11th, 12th and 13th of Dhul-Ḥijjah. The Messenger of Allah said, “Do not fast these days, the days of tashreeq, for they are days of eating and drinking.” (Aḥmad and an-Nasā’i – saheeh)  Hence, the majority of scholars have ruled that one should not fast on these days, whether it is voluntary fasting or compensation for missed days.  There is evidence, however, that it is allowed to fast on the days of tashreeq for those who are unable to slaughter an animal if required during Ḥajj.

Friday is a special day for Muslims and therefore it is disliked (but not absolutely prohibited) to fast on that day.  As ‘Alī said, “He who wants to fast [voluntarily] should do it on Thursday instead of Friday, for Friday is a day of eating, drinking, and remembrance.”

The Messenger of Allah said, “Do not fast on Friday alone.” (Aḥmad, an-Nasa’i and al-Ḥakim ṣaḥeeḥ)  And he said, “Do not fast on Friday except with a day before or a day after it.” (Aḥmad – ṣaḥeeḥ)  It is also related that he entered the room of his wife, Juwairiyah bint  al-Ḥārith while she was fasting on a Friday and inquired, “Did you fast yesterday?” She said, “No.” He asked, “Are you going to fast tomorrow?”  She said, “No.”  So he said, “Then break your fast.”  (Aḥmad and an-Nasa’i – ḥasan)

Therefore, if one fasts Friday along with Thursday or Saturday, it is not disliked to fast on that day.  And if it is a day that one customarily fasts or it happens to coincide with a day of sunnah fasting, such as the day of ‘Arafah, it is no longer disliked to fast on Friday alone.  For the Prophet said, “Do not take Friday as a day of fasting out of other days unless it is a day that one of you normally fasts.”  (Muslim)

It is also disliked to single out Saturday as a day of fasting. The Messenger of Allah  said, “Do not fast Saturday unless it is an obligatory fast; even if one of you finds nothing but the twig of a grape vine or bush to chew on.”  (Aḥmad, Abu Dāwūd, Ibn Mājah and al-Ḥākim – ṣaḥeeḥ)  At-Tirmidhi commented that what is disliked is for a person to choose Saturday as a day of fasting exclusively, as it is the day honored by the Jews.

And Umm Salamah reported that the Prophet often used to fast Saturdays and Sundays together, and that he said, “They are ‘Eids for the polytheists and I like to be different from them.”  (Aḥmad, al-Bayhaqi and al-Ḥākim – ṣaḥeeḥ)

The day of doubt

This is the day following the 29th of Sha‘bān, which might be either the 30th or the first day of Ramadhān. It is unlawful to fast on this day unless the new moon of Ramadhān has actually been sighted. ( Most scholars (except the Ḥanafis) have ruled that if a person should begin fasting while yet uncertain about the beginning of the month, his fast is not valid. However, one may intend the previous night that he will fast if it is Ramadhān and eat if it is not, and then act accordingly.  i.e., the Prophet )  The Prophet ( ) said: “Do not begin the fast of Ramadhān a day or two before it, except for someone who has a fast to fast [for a reason], then he may fast on that day.”  (Al-Bukhāri and Muslim)  And ‘Ammār bin Yāsir remarked, “Whoever fasts on the day of doubt has disobeyed Abul-Qāsim.”70 (Al-Bukhāri) However, the Prophet’s ḥadith also confirms that a person may fast on this day if it coincides with his normal program of fasting or in order to make up a missed day from the previous Ramadhān.

With the exception of the prohibited days mentioned above, a Muslim may fast for additional reward at any time. However, the Prophet instructed people not to place hardship upon themselves regarding worship and to undertake only what could be done without difficulty. He said, “Take on from deeds whatever you are able, for Allah does not lose interest until you do. And indeed, the most beloved deeds to Allah are those that continue, even if they are few.”  (Al-Bukhāri and Muslim)

There are particular days recommended by the Messenger of Allah for voluntary fasting, evidence for which is found in ṣaḥeeḥ and ḥasan ḥadiths. They are as follows:

Fasting six days of Shawwāl after completing the obligatory fast of Ramadhān is a recommended sunnah. The Messenger of Allah said: “Whoever fasts Ramadhān and then follows it with six days from Shawwāl – it will be as if he fasted for all time.” (Assuming that one does this every year. However, it is not obligatory to do it every year.  )  (Muslim, Abū Dāwūd, at-Tirmidhi, an-Nasā’i and Ibn Mājah)  Another ḥadith states, “Whoever fasts six days after [the day of] Fiṭr has completed the year. He who brings a good deed will have ten like it.”  (Ibn Mājah and an-Nasā’i – ṣaḥeeḥ)

Scholars explained that it is like a year of fasting because the reward of each good deed is multiplied by ten. Therefore fasting the month of Ramadhān brings the reward of ten months, and fasting six additional days brings the reward of two months. This equals the fast of an entire year. (Sharḥ Ṣaḥeeḥ Muslim, 8/56.  In other words, 36 days x 10 = 360.)

The six days of Shawwāl are voluntary fasts, and as such, the following rulings apply: (Admittedly, there is some disagreement among Islamic scholars regarding these points. However, the opinions given above are in conformity with the rulings that govern voluntary fasts. There is no distinction in the Shari‘ah between a specific voluntary fast and a non-specific one.) 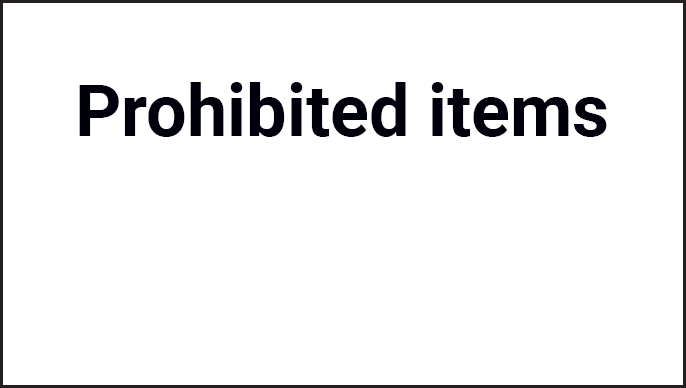