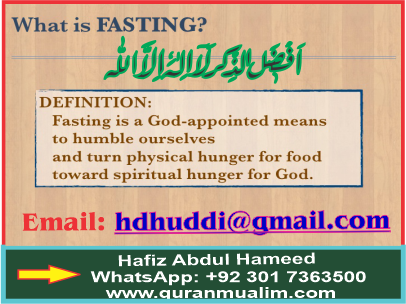 Allah, the Exalted, has addressed all Muslim believers, saying:

O you who have believed, decreed upon you is fasting as it was decreed upon those before you that you may become righteous.(Sūrah al-Baqarah, 2:183.)

In this verse the Creator states that He had enjoined fasting in some form upon the followers of earlier prophets. And He mentions the purpose behind it: “that you may become righteous.”So fasting is a means to attain righteousness, piety and consciousness of Allah (taqwā).

Fasting is a form of worship that is neither action nor speech. The Arabic words “ṣaum” and “ṣiyām” literally mean abstention, as shown in the Qur’ānic verse where Maryam, the mother of Prophet ʽEesā, is told:

“And if you see from among humanity anyone, say, ‘Indeed, I have vowed to the Most Merciful abstention (ṣaum), so I will not speak today to [any] person.(Sūrah Maryam, 19:26.)

In Islamic terminology, “fasting” means abstention from food, drink and marital intercourse from the break of dawn until sunset[1] with the specific intention of earning reward from Allah. While abstention might appear to be something negative, it is in fact positive in Islam, for it is done with the intention to obey Allah, come closer to Him and earn His approval and reward.

In a ḥadith qudsi, Prophet Muḥammad disclosed that Allah, the Mighty and Majestic, has said, “Fasting is for Me, and I [alone] reward for it.”  (Narrated by al-Bukhāri)

That is because Allah alone knows who fasts sincerely, seeking only His acceptance – neither cheating when the opportunity arises nor merely abstaining due to custom or because people expect it of him. Thus, the correct intention to do it for no other reason than to please Allah is an essential pillar of the fast, as it is for all forms of worship, without which the act of worship is unacceptable and invalid.

(In addition to the abovementioned, which are normally permissible but prohibited during fasting, all acts prohibited or disliked generally at other times should obviously be avoided as well. Sūrah az-Zumar, 39:10.

Another aspect of this ḥadith is the indication that Allah’s reward is far beyond what can be expected from any human being, and is possibly unlimited in nature.  As He states in the Qur’ān:

Indeed, those who are patient will be given their reward without enumeration.

Out of the collection of authentic narrations from the Prophet there are several that mention benefits of fasting in the life to come, among them:

As for the life of this world, fasting has been shown medically to be beneficial to both bodily and mental health. But humans are more than physical beings simply requiring nourishment from substances of the earth. Fasting provides nourishment for the soul and has the effect of softening hearts. It teaches patience, self-control and appreciation of the provisions and pleasures often taken for granted. It produces compassion and generosity toward those less fortunate who cannot always relieve pains of hunger at the end of the day. Thus, it points one toward many other beneficial acts of worship in the form of assistance to others.

While physical and moral benefits are definitely among the positive results of fasting, they should not be the cause or incentive for it. One’s primary objective must be to fulfill his obligation to Allah, to show servitude to Him and obey His command. The obligatory fast is the right of the Creator upon His creation and of the Lord upon His servants. As in all types of worship, it consists of whole-hearted obedience motivated by a combination of love for Allah and fear of His displeasure. The performance of righteous deeds is not an end in itself, but reflects and is part of one’s servitude to Allah, and this motivates the believer toward honesty and precision in everything he does.

There are two general categories of fasting: obligatory and voluntary. Voluntary fasting can be done at almost any time, with a few exceptions and conditions.  It will be dealt with later in a separate section.

(Scholars have pointed out that making vows is disliked. While it is obligatory to fulfill them, it could put a person in a position in unforeseen difficulty.  The Prophet told people not to make vows and said, “They do not avert anything and only serve to get something [i.e., worship] out of a stingy person.”  (Al-Bukhāri and Muslim)  Additionally, it is disliked for a person to “bargain” with Allah by saying, “If You do something for me I will fast, give charity, perform ‘umrah, etc.” Allah, the Exalted, has no need of our deeds in exchange for His favors. It is far more befitting to supplicate Him humbly for one’s needs and then show gratitude by increasing righteousness and worship on a permanent basis.   7 Sūrah al-Baqarah, 2:183.)

Although the same general rulings apply to all of these, not all of them will be required of every Muslim during his lifetime.  The obligatory fast of Ramadhān, however, is among the pillars of Islam, and so is of great importance to all Muslims and affects their societies. Hence, the rulings for obligatory fasting are customarily mentioned under this topic. 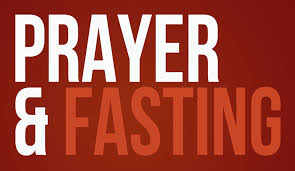