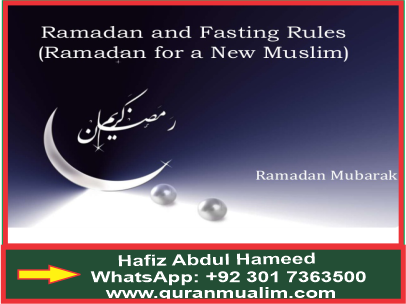 Recommendations for the Fasting Person:

It is recommended that those who fast observe the following:

Taking suḥoor It is preferred for those intending to fast to have a pre-dawn meal, but there is no sin upon one who does not do so. The Messenger of Allah said, “Have suḥoor for in suḥoor there is blessing.” (Al-Bukhāri and Muslim)  This is because it serves to strengthen the person, give him more energy and make fasting easier for him.  He also said: “All suḥoor is blessed, so do not neglect it even if one of you only takes a sip of water. For indeed, Allah and His angels send blessings upon those who have suḥoor.” (Aḥmad – ḥasan) Thus, the sunnah is fulfilled by eating any quantity of food, even just a few bites or a sip of water.

The time for suḥoor is between midnight and fajr, but it is best to have it as close to fajr as possible. Zayd bin Thābit reported: “We ate suḥoor with the Messenger of Allah , and then he got up to pray.” Someone asked, “How long was it between the two?” He said: “As long as [the recitation of] fifty verses.”(Al-Bukhāri and Muslim)  The Prophet’s companions would be the first to break the fast and the last to have suḥoor, delaying it until just before the break of dawn.

Refraining from negative behavior – Fasting was prescribed by Allah in order to purify the soul and increase piety. ( As stated in the Qur’an, Sūrah al-Baqarah, 2:183. )   The fasting person must constantly be on guard against any act that may cause him to lose the benefits of his fast.

Fasting is not merely to refrain from eating and drinking, but from everything that Allah has forbidden at all times. The Prophet confirmed, “Fasting is not only abstaining from food and drink, but from empty and immoral speech. So if someone should insult you or behave badly toward you, then say, ‘I am fasting, I am fasting.'”  (Al-Ḥākim – ṣaḥeeḥ) (In another version narrated by al-Bukhāri, the Prophet  said: “Fasting is a shield. One who fasts does not use obscenities or act in an ignorant manner. If someone argues with you or insults you, say: ‘I am fasting, I am fasting’.)   And he said, “Anyone who does not refrain from making false statements and acting upon them – Allah has no need of his refraining from food and drink.”  (Al-Bukhāri)

This shows that Allah, the Exalted, does not appreciate the fast of a person who is disobeying Him in other respects. (Most scholars are of the opinion that the fast of one who does not pray is not accepted at all and that other sins can reduce the reward of fasting ) And one whose heart is heedless, having no effect on his conduct while fasting, will not be counted among the sincere servants of Allah.  Another ḥadith states, “Possibly one who fasts gains nothing from his fast but hunger, and possibly one who stands in [night] prayer gains nothing from it but wakefulness.”   (Ibn Mājah and al-Ḥākim – ṣaḥeeḥ) 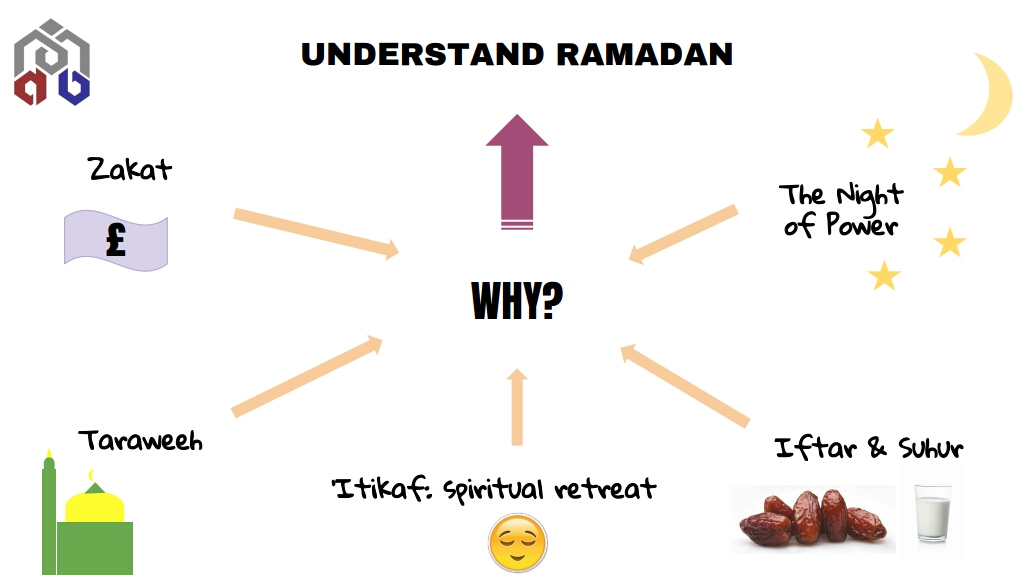 Generosity and study of the Qur’an – Ibn ‘Abbās reported: “The Messenger of Allah ( ) was the most generous of people, and he was the most generous ever during Ramadhān when [the angel] Jibreel would meet him. He would meet him every night of Ramadhān and review the Qur’an with him. Then he was more generous than a swift, far-reaching breeze.” (Al-Bukhāri)  Being charitable and helpful to people is prescribed at all times, as is studying the Qur’an, but both are especially emphasized during the month of Ramadhān. For those who are able it is recommended to read or recite the entire Qur’an at least once during this month.

Tarāweeḥ prayers – Another sunnah practice is to attend tarāweeḥ prayers in a masjid or to perform them at home or elsewhere, either in congregation or individually. The Prophet encouraged it, saying, “Whoever performs night prayers in Ramadhān out of faith and expecting reward, his previous sins will be forgiven.” (Al-Bukhāri and Muslim)

The Messenger of Allah led his companions in prayer for a few nights in Ramadhān, but then he feared it might be made obligatory for them so he discontinued it and prayed privately.  (Al-Bukhāri and Muslim)  After his death when there could be no further revelation, ‘Umar bin al-Khaṭṭāb brought the people together again under one imam to restore the sunnah established by Allah’s Messenger.

Like all voluntary night prayers, the time for tarāweeḥ is from after the ‘ishā’ prayer until fajr.  Muslims have traditionally prayed tarāweeḥ in the masjid right after ‘ishā’ without delaying it.  But for one who prays at home, he may pray at any time of the night.

Those who prefer twenty base it on the fact that when ‘Umar gathered the people, they prayed twenty rak‘ahs and many of the Prophet’s companions also prayed twenty. It was never related that any of them objected to this or denied the permissibility of more than eight rak‘ahs.

The general practice has been that when the imam lengthens his recitation, as did the Prophet and his companions, the number of rak‘ahs is fewer, but when he recites lesser portions of the Qur’an it is preferred to increase the number of rak‘ahs. In any case, tarāweeḥ is a sunnah practice for the month of Ramadhān, so if one prays two rak‘ahs or more he earns reward for whatever he prays, and if he does not pray tarāweeḥ there is no sin upon him.

Thus, the length and number of rak‘ahs may vary, and there is no limit to what may be prayed in tarāweeḥ because the Prophet did not specify any number. He only said: “The night prayer is two [rak‘ahs] by two. If one of you fears the approach of fajr, let him pray one rak‘ah of witr.” (Al-Bukhāri and Muslim)  And he said, “Whoever prays with the imam until he leaves will have the reward of praying throughout the night. (At-Tirmidhi – ṣaḥeeḥ)  Therefore, it is preferred in Ramadhān – but not obligatory – to pray with the imam until he finishes the prayer, regardless of the number of rak‘ahs.