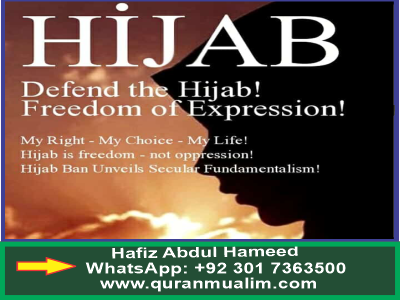 The rules and regulations dealing with hijab as outlined by Shari‘a are comprehensive leaving practically no aspect of a Muslim’s life untouched. The religious, social, psychological, emotional, spiritual, cognitive, and personal practices are all affected by the injunctions of hijab for women and lowering of the gaze for men. Sound guidance has also been given regarding all the hidden and apparent aspects of covering the satr and lowering of the gaze. As you have read previously, the injunctions about hijab were not revealed together at once. At first, there came the aya instructing separation of men and women; then came the injunctions about covering the body, personal beauty, and adornments; then about the use of perfumes, walking, talking, lowering of gaze, and covering the face. Later, the ayas about the Islamic code of conduct between the opposite sex, which even addressed the inner thoughts and fantasies one has about the opposite sex, were revealed. All these ayas make it impossible to believe, even for a moment, that the Shari‘a tolerates any mixing and social intermingling between nonmaúram men and women, eventually leading to intimate relations. On the contrary, the type of rules and restrictions placed on women who come out of their homes, makes it abundantly clear that the Shari‘a wants women to understand its position about women leaving the home and that they should avoid leaving their homes.For more information

So that the flagrant sexual misconduct and turmoil of the past or present period of Jóhiliyya do not permeate into their lives. And so that women, in their ignorance and quest for what they perceived to be the greater enjoyments of the Jóhiliyya culture, would not renounce their modesty, good character, and upright behavior. Thus, as many faces and models of shamelessness, immodesty and licentious behavior were manifested by the former Jóhiliyya, Shari‘a countered them with that many preventive measures for safeguarding the modesty and honor of a woman. The preventive measures

established by the Shari‘a successfully fortressed the Muslim women from these immodesties and from being affected by the moral degeneration of the modern times.

A COMPARISON BETWEEN THE WOMEN OF THE EAST AND WEST

The noble woman of the East values and protects her modesty and chastity so highly that she veils herself, both literally and figuratively, and limits herself to the four walls of her house. The internally torn woman of the West, by contrast, exhibits everything she has to offer, attracts men and is attracted to them, and leaves her home to knock about aimlessly in cinemas and cafes, malls and bazaars, parks and theatres, exhibitions, and circuses. How does one compare the sinful false vanity of Jóhiliyya to the billowing ocean of honor and modesty of Muslim women? As a poet has said,

How do you compare a dead lantern with the light of the sun?

The women of the East and West follow two very different paths: one aims to reach a spiritually-elevated character, while the other strives to fulfill the base physical desires and needs. Likewise, they differ fundamentally and at a secondary level in their mental outlook and outward. How then is it possible for Shari‘a, which is determined to sever all ties with Jóhiliyya culture, to permit any association between the two? And how could it tolerate any resemblances to develop between their widely differing paths? Shari‘a uprooted immodesty and gave the commandment of hijab to chaste and virtuous women so that no similarities remain between Muslim women and the women of the old and new periods of Jóhiliyya.

With all this in mind, the Muslim world should not think that by lifting one lesser condition of hijab, thinking it unnecessary or unimportant, that the rest of the laws will remain inviolable. The nature of man’s base urgings are such that they exert a pressure on all higher human thoughts and actions until they bring them down to their base level. The deplorable state of affairs of shamelessness, immodesty and indecent behavior prevalent in modern society did not reach this junction at once. It was a gradual process which started when they ceded to smaller indecencies, in their lack of wisdom and foresight, and thought them harmless. It was, therefore, inevitable under the law of cause and effect, that once the grip of morality loosened, the shamelessness and indecencies reached epidemic proportions. The point which these societies have now reached are the very abominations that the lesser conditions of hijab were designed to prevent. It is characteristic of human nature that once it encroachs upon the first limit, it becomes successively easier to challenge the major laws until all boundaries have been crossed.

So when the fairer sex in these societies took the major step of abandoning the four walls of their homes in favor of the outside world, it was comparatively easier to take the next step and break the silence of their voices, which had long gone unheard. After this, the faces behind the veils came out and the gaze too gained the freedom to wander, to see and be seen. Raising of the gaze led to the freedom of thought which opposed the very idea of hijab. Clothes were now designed to enhance and reveal a woman’s body; at first, necklines and arms and then legs and thighs were exposed. Thus, all the veils were removed from the private and excitable parts of the human body leading ultimately to complete nudity, which was precisely what the universal laws of hijab intended to prevent. Today, hundreds of thousands of nudists live in the European and other Western countries. The newspaper Inqilób writes:

In France and Germany, a new trend of complete nudity has begun. Even an association of nudists has been established in Germany which calls itself the National Association of Nudists. Its membership has already reached four hundred thousand, of which women form a vast majority. A 1929 survey revealed that its members numbered over four million. ( Inqilób, Lahore, Dec. 30, 1929 as quoted in Ta‘līmót-e-Islam Madina, May 9, 1929 as quoted in Ta‘līmat-e-Islam)

The newspaper Madina in Bajnor, India, reporting on the situation in France, writes:

The people of France, in order to practice their beliefs in naturalism, have established a naturalists’ society consisting of several thousand members. They live only on fruit, vegetables, and water, and shun clothing as much as possible, choosing to wear very skimpy bathing outfits instead. The most fanatic among them, however, refuse to wear even those, calling them unnatural and unnecessary. These members have announced that they will cast off all clothing and will live in nude. The members of this club include men, women, children and elderly people and their membership is increasing every day. In Germany, the number of people claiming to be naturalists numbered three million last year, and this year the membership has increased by one million more (Madina, May 9, 1929 as quoted in Ta‘līmat-e-Islam)

Obviously, after reaching the peak of such shamelessness, open and unbridled sexual promiscuity and fornication is not surprising at all in Western cultures. It was this sexual promiscuity and shamelessness which Islam eradicated by implementing the various commandments of hijab. Do the Muslims not realize that in their blind following of shameless societies, they will one day reach the same peaks of immo- rality that their Western educators have already reached?

Ancient and Present Age of

…And you will never find a change in Allah’s consistent practice.(33:62)

The truth contained in this aya translates into the principle that whenever Muslims abandon the teachings and practices of our Blessed Prophet s in favor of using their own intelligence as their guides in life, they are destined for destruction. Salvation can only come by obeying the laws of Allah u as revealed to our Blessed Prophet s while reliance on our opinions and abilities leads only to one’s downfall.

The social system which the Qur’an and the Sunna give to the world is one which guarantees piety and cleanliness, purity and chastity, respect and inner peace. It is only through Islam that Allah u has blessed Muslims with honor and glory. Abandoning the ways which are characteristic of Islamic society in favor of foreign cultures and ideas, fashions, and norms, should be repulsive to the very self-respect

of Muslims. They have convinced the naive and weaker Muslims the necessity of women’s “emancipation,” thereby engaging them in the same kinds of lewd, indecent, and immoral behavior they follow, in order to destroy the purity and the virtues of Islamic societies and to foster moral diseases within them. These enemies of Islam have insidiously laid all kinds of traps within Muslim societies, to which those Muslims who have a weak attachment to the Qur’an and Sunna, fall prey to with ease.

The moral destruction, lewdness and licentious behavior that the people in Europe, America and other Western countries are suffering from today began with bringing women out in the open. Once in the streets, the doors were open for physical and sexual exploitations, which in turn gave way to lewdness, nudity, and all kinds of other immoral and shameless behavior. A virtuous English woman, sincerely disturbed by the increasingly immoral behavior of women in her own society, wrote an article which was translated and reproduced in an Egyptian monthly magazine, al-Manór. She writes:

English women, as a whole, have lost their chastity and virtue. It has become difficult to find women who have kept themselves pure and not defiled themselves by engaging in illicit behavior. They no longer possess any semblance of modesty or shamefulness, and live their lives with such unlimited and unnatural freedom that it has left them unworthy of being called human beings. We envy the Muslim women of the East who live lives of honesty and piety in obedience of their husbands and who do not let the stains of sin mar their purity and chastity. If they feel pride in their ways of life, they have every right to do so. The time is coming when the commandments of Shari‘a will come to aid and protect the virtue of English women as well. ( Quoted in Ma‘órif al-Qur’an, vol. 9 10 25:30)

Anyway, the Qur’an and hadith have elucidated the subject of hijab with such clear and convincing arguments that there no longer remains any room for doubt in the wisdom behind it. 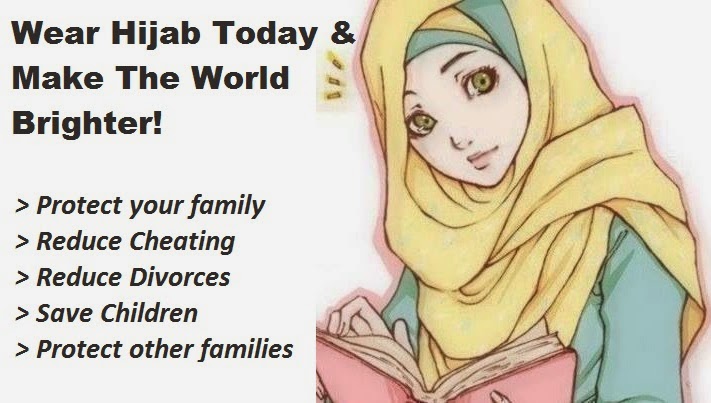