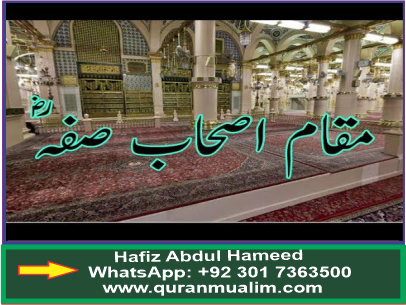 It was a roofed structure erected adjacent to the Masjid in a corner of it. Most of the Companions had also to attend, along with their religious duties, to their trade and cultivation needs, but some of them devoted all of their time to seeking knowledge, performing devotional deeds and disciplining themselves under the care of the Prophet (PBUH). They did not have any family. When they got married, they moved out of that circle. A group of them used to go to the forest in the day to collect firewood and arrange for food for the entire group by selling it. They kept the company of the Prophet (PBUH) in the day, listened to the Traditions (Ahadeeth), and slept on that platform at night. (Sahih Muslim, Kitabul Imara, Bab Thubootul Jannah lil Shaheed.)

Hazrat Abu Hurayra was one of them. None of them ever had two sheets of cloth with which they could cover the upper and the lower parts of his body. They used to tie a sheet around their neck in such a way that it covered the lower part of their body up to the thigh. (Sahih Al-Bukhari, 1: 114 )Sometimes an Ansar brought a branch of the date tree containing dates that he hung up by the roof. When the ripe dates dropped, the residents of Suffa picked them up and ate them. At times they did not find anything to eat continuously for two days. Very often they fell down to the ground due to the weakness and exhaustion caused by starvation while praying in congregation behind the Prophet (PBUH) .The outsiders considered them sick and thought that they were suffering from some kind of mental disturbance. ( Sunan Tirmizi, Abwabuz Zuhd.) If some food came to the Prophet (PBUH) as Sadaqa (food given out for the poor), he sent it all to them. But if there was some food sent to him for his use, he called them to join. In that case the Prophet (PBUH) ate with them. Many a time the Prophet (pbuh) distributed them over the Muhajireen and Ansar so that each of them took one or two of the Suffa residents with him and fed them. (Sahih Al-Bukhari, Kitabul Mawaqeet.) Hazrat S’ad bin ‘Ubada was rich and generous and at times he entertained as many as eighty persons from the group. 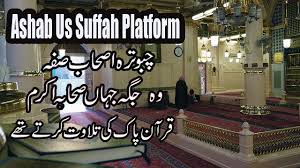 The Prophet (pbuh) cared so much for them that once he turned down the request of his daughter Hazrat Fatma for a maid slave to help her do the household chores and told her, “It is not possible that I give you while the Suffa people remain hungry.” (Sunan Bayhaqui, 9: 304. Musnad Ahmad, 1: 79, 106. ) They used to remain engaged in devotional services and recitation of the Qur`an at night. There was a teacher appointed for them from whom they used to take lessons. That is why most of them were called Qaari. If Muslims had to be sent out for preaching Islam, they were taken from that group. In the Battle of Ma’una seventy persons sent for preaching Islam were from this very group. (Sahih Muslim, Kitabul Imara, BabThubootul Jannah lish Shaheed, Sahih Bukhari.)