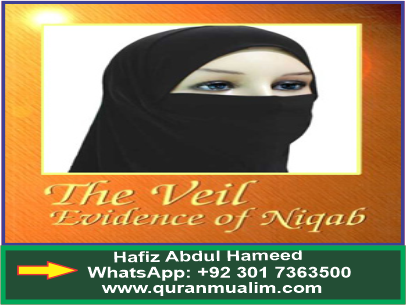 Many aûôDöth were narrated in the first chapter on evidence from Qur’an. As it is unnecessary to repeat them, a few new aúódõth will be brought [in this chapter] from the remaining compilation. To compile and cite all the aúódõth on this issue is neither possible for an incapable person like me nor is it necessary. I believe that the evidence from the Qur’an alone is sufficient for one who wishes to follow it; and for those who do not wish to live by the Shari‘a, even the largest collection of Quranic ayas and aúódõth is of no use.

In these times, we observe men and women sitting together in the name of studying the Qur’an during which they read these injunctions but are completely unaffected by them. It is as if they are mocking Allah’s commandments, sitting together without any hijab or partition. For such people, the Blessed Prophet s said, “Many of those who read the Qur’an are such that the Qur’an curses them.”

Firstly, I will mention some hadith which illustrate how strict the ýaúóbiyót l were in observing hijab. In this regard, they were the same with all men. They observed hijab in front of every man including the Blessed Prophet s and covered every part of their body including their faces. 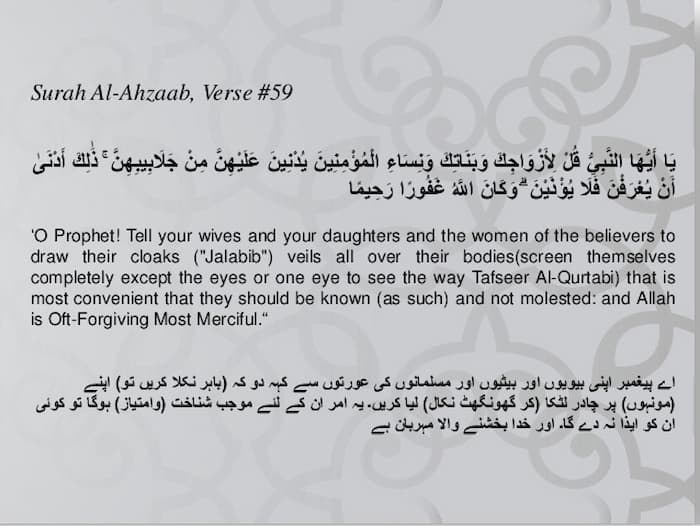 THE HIJAB OF THE ýAûôBIYôT

After the revelation of the aya of hijab, the ýaúóbiyót j were very particular about observing hijab. They even covered themselves in front of the Blessed Prophet s and never came out in front of him without hijab. If they needed to give or take something or ask questions, they did so behind a curtain. Therefore, in a long hadith, ‘ô’isha j narrates:

This hadith is clear evidence that the ýóúóbiyót l observed hijab from the Blessed Prophet . This is why the woman extended her hand from behind the curtain. If it was acceptable for women to come without hijab in front of men, then what was the need for a curtain? Also, if this type of hijab was opposed to the Shari‘a, then the Blessed Prophet s would have promptly informed her so that others are not led astray.

Qais ibn Shammós g reported that a ýaúóbiya j whose name was Umm Khallód j, came to see the Blessed Prophet s to inquire about her son who had been martyred in a battle. She was hiding her face behind a veil. One of the ýaúóba gasked her, “You have come to inquire about your martyred son and you have covered your face with a veil?” She responded, “I am distressed by the loss of my son, I don’t wish to be distressed by the loss of my modesty [úayó] ( ûayó means modesty and shyness. In Islamic terminology, úayó refers to the feeling that enjoins good and forbids evil. 3 Abñ Dówñd, Faðl Qitól al-Rñm) as well.” The Blessed Prophet s said to her, “Your son will have the rewards of two martyrs.” She asked him, “How come, O Prophet of Allah u?” He responded, “Because he was killed by the People of the Book.”

OBSERVANCE OF HIJAB EVEN IN DISTRESS

It is clear from the above hadith that Umm Khallód j veiled her face from the ýaúóba l; it also indicates her high level of modesty. Despite the loss of her son, she remained faithful to the orders of Allah u and even compared losing her modesty to losing her son.

This hadith also teaches us that hijab is a requisite for women regardless of the circumstances of sorrow or happiness. Nowadays, some people are under the impression that [the Shari‘a is only to be followed in normal conditions]. In distressful or joyous occasions, one is exempt from following the Shari‘a and is not required to follow it; [however,] this is grave ignorance.

Women are now seen in funeral processions standing at the doors without hijab as the deceased is being led away or even joining the processions to the graveyard without hijab. They are also seen without hijab in weddings and while travelling. In all these situations, it is forbidden to come out without hijab. Furthermore, this hadith proves that it is necessary to cover the face in the Shari‘a as the ýaúóbiya covered her face with a veil.