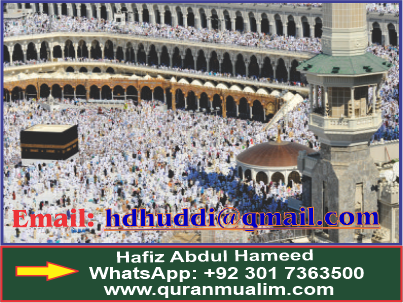 HAJJ (THE PILGRIMAGE TO MAKKAH)

THERE ARE THREE TYPES OF HAJJ:

1.Hajj-at-Tamattu (Umrah and Hajj with a break between the two i.e. doing Umrah and taking offIhram of Umrah and after a period of time putting Ihram again for Hajj).

2.Hajjal-Qiran (Umrah and Hajj together i.e. in the continued Ihram state).

If a person has put on Ihram (Ihram clothes and Niyyah) for Haj- jat-Tamattu‘, what should he doafter arriving at Jeddah Interna-tional Airport?

A person arriving at Jeddah International Airport in Ihram for Hajjat-Tamattu‘ will go to Makkah (Al-Masjid Al-Haram) to do Umrah of Hajj, after finishing Umrah (Tawaf, Sa‘y, shaving or cut-ting hairof head), he will take off Ihram and will be free from all the restrictions of Ihram. He will put onIhram again on 8th Dhul-Hijjah from the residence at Makkah to perform Hajj. He will start recitingTalbiyah once again and will proceed to Mina on 8th Dhul-Hijjah.

Question If a person has put on Ihram (Ihram clothes and Niyyah at Meeqat) for Hajjal-Qiran, what he shoulddo?

Answer: A person who has put on Ihram to do Hajjal-Qiran (Hajj combined with Umrah) will perform Umrahi.e. Tawaf of Ka‘bah and Sa‘y but will not shave or cut the hair of head, and will continue in the stateof Ihram (Ihram clothes, Niyyah and prohibitions) for Hajj and he will go to Mina on 8th  Dhul-Hijjah.

Ihram clothes can be changed/washed, if necessary.

Question If a person intends to do Hajjal-Ifrad (Hajj only), what should he do?

Answer: A pilgrim who intends to do Hajjal-Ifrad will enter in Ihram at Meeqat (for people coming fromoutside) or from the place of residence (for residents of Makkah) and can do Tawafal-Qudoom (Tawafof arrival) and Sa‘y then proceed to Mina or after putting on Ihram at Meeqat or at the place ofresidence (Makkah) can go to Mina directly on 8th  Dhul-Hijjah.