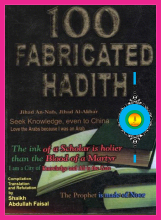 Needs and Important of Hadith

This is an admitted fact that after the revealed book of Allah, The sunnah of Holy Prophet is the greatest source of knowing the comments of Sharia. All the scholar and interpreter are agreed upon this.

Hadith is linked with Quran and is not a separate thing and Hadith is a detail and elaboration of the commandments of the Holy Quran. For example in the Holy Quran at more than one Hundred times ordered established the Prayer have been given but until the messenger of Allah (PBUH) described the method to say prayer with his own actions in front of the Muslim  by that time no Muslim could established the prayer as we find in a narration that when order to say prayer revealed it was asked how prayer should be said. In  reply the Holy prophet said “say your prayer” in such a way as you see me while i am saying my prayer”.

In the Holy Quran Allah almighty say “and he who will oppose the messenger of Allah (PBUH)  after the clear exposure of right path and that man will follow the author path besides the path of believers than we (almighty Allah) will hand over him to that other path to which he had gone and we shell enter him in the Hell that is a very bad living place”.

Thus Hadith of the Prophet is source of Islamic Sharia, interpretation of Quran, base of obedience of the Holy Prophet, elaboration of commandments and warship, correspondents of culture heritage of the era of the Holy Prophet, and the custodian of historical tradition. the Holy said “I am going to leave two heavy thing, if you will abide by those will not be misguided, those thing are book of Allah (Quran and my Sunnah)