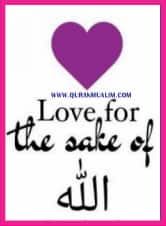 Muādh ibn Jabal narrates, “I heard the Messenger of another for My Majesty and Grandeur will have pulpits of Allah saying: ‘Allah has said: ‘Those who love for the sake of Allah, and Prophets and martyrs will feel delighted for them.’”(Tirmidhi, al-Jami-us-sahih (4:597#2390)

Umar ibn Khattab  narrates that the Holy Prophet said, “Indeed there are some exalted servants of Allah who are neither Prophets nor martyrs. On the Day of Resurrection the Prophets and martyrs will exult over their position conferred upon them by Allah.” The Companions asked: The Prophet of Allah said that who love the people love for the sake of Allah”. By Allah their faces will be radiant and they will (sit) on light. They will neither fear when people fear nor grieve when people grieve

On right of Rahman and both His Prophets nor martyrs. The light of their faces will be dazzling the viewers’ vision. The Prophets and martyrs will marvel at couches and nearness to Allah.’ It was asked, ‘Who are they, O Messenger of Allah?’ The Holy Prophet said, ‘They are the people from different tribes who assemble to remember Allah). They choose beautiful words for remembrance of Allah as a date-eater selects the best dates.’

Abu Mālik Ash‘ari narrates, “I was with the Holy Prophet when this verse was sent down: ‘Do not ask about things which, if made manifest, might do you harm.’” He says, “We asked the Beloved Messenger of Allah questions to which he replied: ‘Some of the servants of Allah are those who are neither Prophets nor martyrs. But on the Day of Resurrection Prophets and martyrs will exult over their nearness to Allah and the couches granted to them by Him.’ A Bedouin, sitting on a side, bowing on the knees, strucking his both hands ashamed,O Allah messenger inform us about those who they are. I LOOKED THE holy face of lovely messenger of Allah He said, ‘They are the people who come from different areas . They also try to surpass each other in spending in the way of Allah. They love each other love for the sake of Allah. Allah will brighten their faces. Allah will place pulpits of pearls for them in front Him. On that day men shall be obsessed until dread but they shall not be fearful men shall be sad but they shall be happy.’”