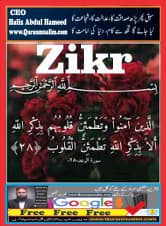 Abu Huraira said  that the prophet of Allah said, “There are some |  Angels of Allah who go around in search of remembrance gatherings. When they pass by any gathering of remembrance circles, they say to one another, ‘Sit down.’ When the people make supplication, the angels say āmeen (so be it) so that they are granted. When the people send salutations on the Holy Prophet, they also send salutations with them until the proceedings come to an end. Then the angels say to one another, ‘Congratulations to them as none of them is going back without being forgiven.’ If people glorify Allah, angels also glorify Him. If they praise and sanctify Allah, angels also praise and sanctify Him. If people magnify Allah, angels also magnify Him. Then they ascend to the Lord, who knows of His events far more than they do. Even then they say, ‘O our Lord! Your servants glorified You and we also glorified You; they proclaimed Your greatness and we too proclaimed Your greatness; they praised and sanctified You and we also praised and sanctified You.’ Allah says, ‘O My angels! Bear testimony that I have forgiven them.’ The angels submit, ‘There are such-and-such great sinners amongst them.’ Allah says, ‘These are such (blessed) people that the one who joins their company is not left unfortunate (so bear witness that I have forgiven these sinful servants as well).’(Hindi, Kanz-ul-ummal (1:434#1876)) Abu Huraira said  that the Holy Prophet said, “ There are some particular  angles of Allah ,they are searching the session of people who did dikr of Allah in the earth . When they find any such meeting they join in and sit with them….

The World of The Angels English

Why we believe in the Angels English PDF