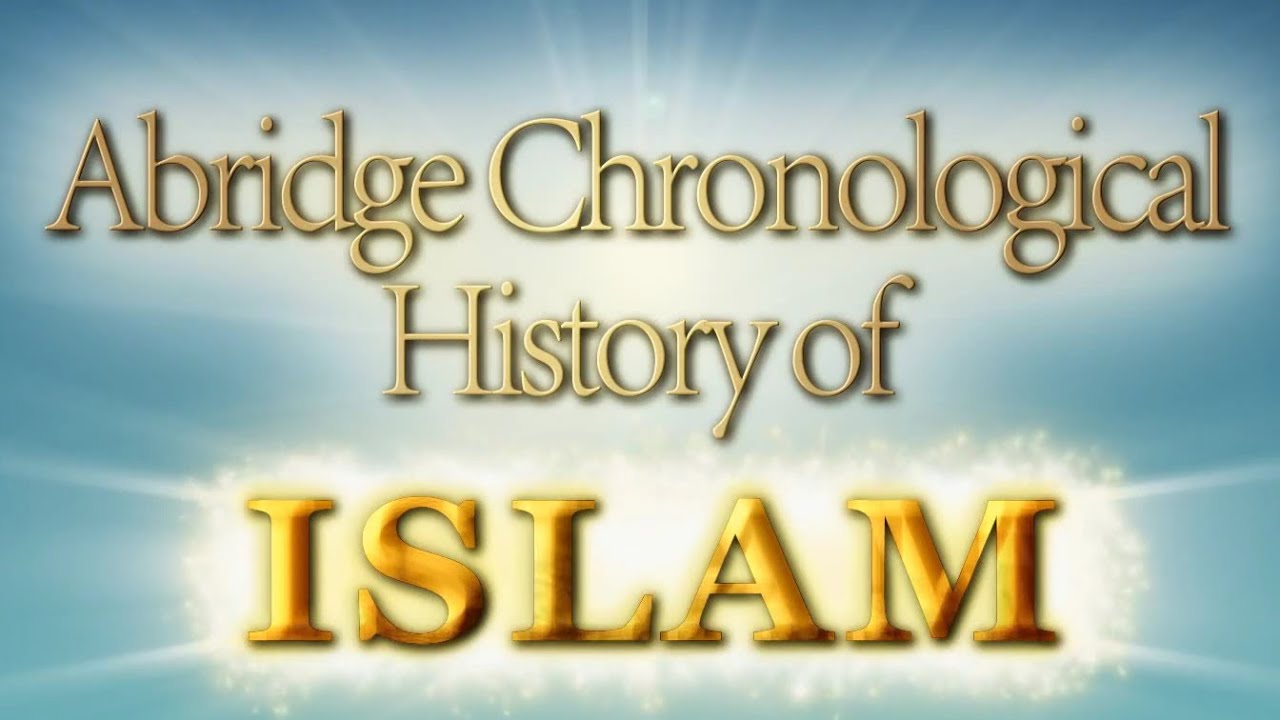 In the year sixth Hijri the Prophet (PBUH) told the Muslims about a dream in which he had seen that he was performing Tawaaf (circumambulation of the K’aba) in Makkah with his Companions. Hearing it, the eagerness to perform ‘Umrah was aroused in the hearts of the Muslims and made them restless. They persuaded the Prophet (PBUH) to perform ‘Umrah that very year. (Seerah Halabiya, 2: 688.)

As the Muhajireen in general and most of the Ansar were eager to perform ‘Umrah, 1,400 persons became ready to accompany the Prophet (PBUH). They performed the rituals for the commencement of the ‘Umrah at Zul Hulayfa. The camels, which were taken along for sacrifice, were earmarked by putting the iron ring in their necks. (Sahih Al-Bukhari, Kitabul Maghazi, Bab Ghazwatul Hudaybiya.)For security reasons, a new Muslim from the Khuza’a tribe, whose acceptance of Islam was not yet known to the Quraysh, was sent ahead to find out about the reaction of the Quraysh (to the Muslims’ plan to visit Makkah). When the Prophet (PBUH) reached close to ‘Usfaan, the informant brought news that the Quraysh had gathered all the tribes around and declared that they would in no condition allow the Muslims to enter Makkah. (Sahih Al-Bukhari, Kitabul Maghazi, Bab Ghazwatul Hudaybiya.)

The Quraysh started making preparations on a large scale to fight against the Muslims. They called different tribes to join them with as large an army as they could arrange. The armies assembled outside Makkah at a place called Baldah. Khalid bin Waleed, who had not accepted Islam yet, advanced with 200 soldiers as a front unit of the army and reached Ghumaym, which fell between Rabegh and Juhfa. ‘Ikrama, son of Abu Jahl, was also with him. (Seeratun Nabi, 1: 449. )The Prophet (PBUH) evaded a direct confrontation with Khalid bin Waleed and changed his route, moving forward by taking a path on the right and reached Ghumaym. Khalid knew about it only after the prophet’s arrival there and informed the Quraysh about the situation as quickly as possible.

The Prophet (PBUH) kept on advancing and reached Hudaybiya. There they faced shortage of water. There was only one well there, which dried as soon as the Muslims started drawing water from it. But due to the blessings of the Prophet (PBUH) the well was filled with sufficient water again. (Sahih Al-Bukhari, Kitabul Maghazi, Bab Ghazwatul Hudaybiya.)

The people of the Khuza’a tribe had not accepted Islam yet, but they were an ally of Muslims and used to inform the Prophet (PBUH) about the plans of the Quraysh and other disbelievers against him. When the chief of the tribe Budayl bin Warqa` (who accepted Islam at the time of the conquest of Makkah) came to know about the Prophet’s arrival at Hudaybiya, he came to meet him with a few trusted men an informed him that a huge army of the Quraysh was determined to stop the Muslims from entering Makkah. The Prophet (PBUH) told him to go to the Quraysh and tell them that he had come to perform ‘Umrah, not to fight against them. He added, “The Quraysh are badly shattered due to the battles and have suffered serious loss. It is better for them to enter into a peace treaty with the Muslims for a fixed period of time and leave me in the hands of the Arabs to deal with me. But if they do not agree, I will, by God Who controls my life, fight against them until my throat is slit, and then whatever God wishes to occur takes place.”

Budayl went to the Quraysh and said: “I have brought a message from Muhammad (PBUH) and wish to convey it to you, if you permit.” Some troublemakers replied, “We do not have to listen to his message.” But the sane persons from them allowed Budayl to speak. He conveyed the conditions of the Prophet (PBUH). ‘Urwa bin Mas’ud Thaqafi rose from his seat and thus addressed the Quraysh, “Am I not a father figure for you, and are you not like my children?” All of them replied in the affirmative. ‘Urwa asked them again, “Do you have any doubt about my integrity?” All of them replied in the negative. He then told them, “Then allow me to go to Muhammad (PBUH) and settle the dispute with him. He has offered sensible terms and conditions.” ‘Urwa thus went to the Prophet (PBUH), presented himself as a representative of the Quraysh, and said, “Muhammad! Suppose you vanquished the Quraysh, but then has there ever been any other person who thus destroyed his own people? But if the battle goes against you, the crowd that is around you will disappear like dust.” Abu Bakr was so much enraged at the later part of ‘Urea’s remark that he used an abusive word against ‘Urwa and said, “Shall we desert the Prophet Muhammad (PBUH)?” ‘Urwa inquired about the identity of the person who cursed him so rudely. Learning from the Prophet (pbuh) that he was Hazrat Abu Bakr, ‘Urwa commented, “I would have paid him back for his harsh word, but I owe him a favor that I have not been able to repay yet.” (Sahih Al-Bukhari, Kitabush Shuroot, Bab Al-Shuroot fil Jihad.) 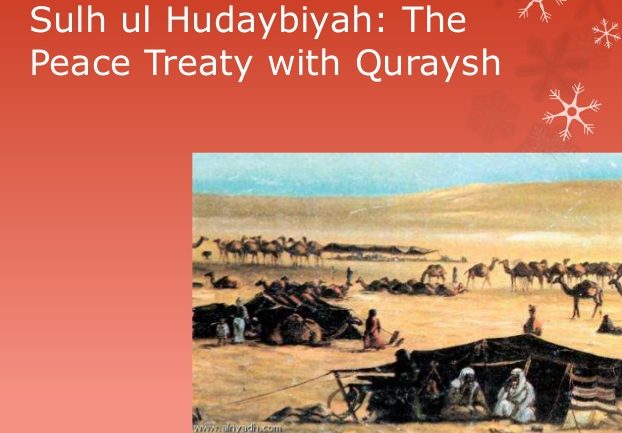 As is customary in the Arab culture, ‘Urwa was frequently touching the beard of the Prophet (pbuh) to express his intimacy to him. Mugheera bin Sho’ba®, who was standing behind the Prophet (pbuh), considered ‘Urwa’s frankness an immodesty and rebuked him harshly, “Move your hand, or you will never be able to take it back.” ‘Urwa recognized Mugheera and said, “O the deceitful! Am I still not helping you for a mischievous deed of yours.” This referred to an incident in which Mugheera had killed a few persons before accepting Islam for whom ‘Urwa was paying the blood money to the claimants. (Sahih Al-Bukhari, Kitabush Shuroot, Bab Al-Shuroot fil Jihad.)

The instances of the Companions’ excessive love for the Prophet (PBUH) that ‘Urwa witnessed impressed him very much. After returning, he told the Quraysh, “I have seen the courts of Qaysar, the ruler of the Roman Empire, Kisra, the ruler of the Persian Empire, and Najjaashi, the ruler of Habsha (Abyssinia), but I have not seen anywhere such love and devotion that I witnessed in Muhammad’s companions with which they lavish him. When Muhammad (PBUH) speaks, all around him keep quiet. None dares to look at him with full gaze. When he makes Wudhu (ablution), his followers rush to take the used water in their hands. When he spits, they take it in their hands and rub it over their faces and hands.” (Sahih Al-Bukhari, Kitabush Shuroot, Bab Al-Shuroot fil Jihad.)

As the talk had remained inconclusive, the Prophet (pbuh) sent Khiraash bin Umayya to the Quraysh to pursue it further. But the Quraysh killed Khiraash’s camel, which belonged to the Prophet (pbuh), and were about to make an assault on his life, but the allies of his tribe intervened and protected him. He somehow managed to return safely. ( Musnad Ahmad, 4: 324, Seerat Ibn Hisham, 2: 314-15. )

Now the Quraysh sent a troop of soldiers to attack the Muslims, but all the soldiers were taken prisoners. Although it was a serious offence, the Prophet (PBUH) treated them with magnanimity and freed them all. ( Sahih Al-Bukhari Kitabush Shuroot, Bab Al-Shuroot fil Jihad.) This incident has a reference in the following verse of the Qur`an:

“And He it is Who has withheld their hands from you and your hands from them in the midst of Makkah, after He had made you victorious over them” [Al-Fath, 48: 24].

The Prophet (pbuh) wished to continue the peace talk. He selected Hazrat ‘Umar as emissary, but ‘Umar wished to be excused, as the Quraysh were his bitter enemies and there was not a single person from his tribe in Makkah who could protect him. The Prophet (pbuh) sent Hazrat ‘Uthman to the Quraysh. He went to Makkah under the formal protection of Abaan bin Sa’eed, a relative, and conveyed the Prophet’s message to the Quraysh. They captured him and confined him to a place. But a rumor spread that he was slain. (Musnad Ahmad, 4: 324, Seerah Ibn Hisham, 2: 314-315  Seerat Ibn Hisham, 2: 315-16 )When the Prophet (PBUH) heard about it, he was deeply hurt and announced in resoluteness, “Now it is incumbent upon us to avenge the murder of ‘Uthman.” Saying this, he took a seat under a Babool (acacia) tree and called the Companions to take an oath of allegiance to fight until death. They took the oath at his hands with exemplary enthusiasm, both men and women. This pledge, known as Bay’ate Ridwan, is of great importance in the history of Islam. This incident and the concerned tree are mentioned in the Qur`an in the following verse: 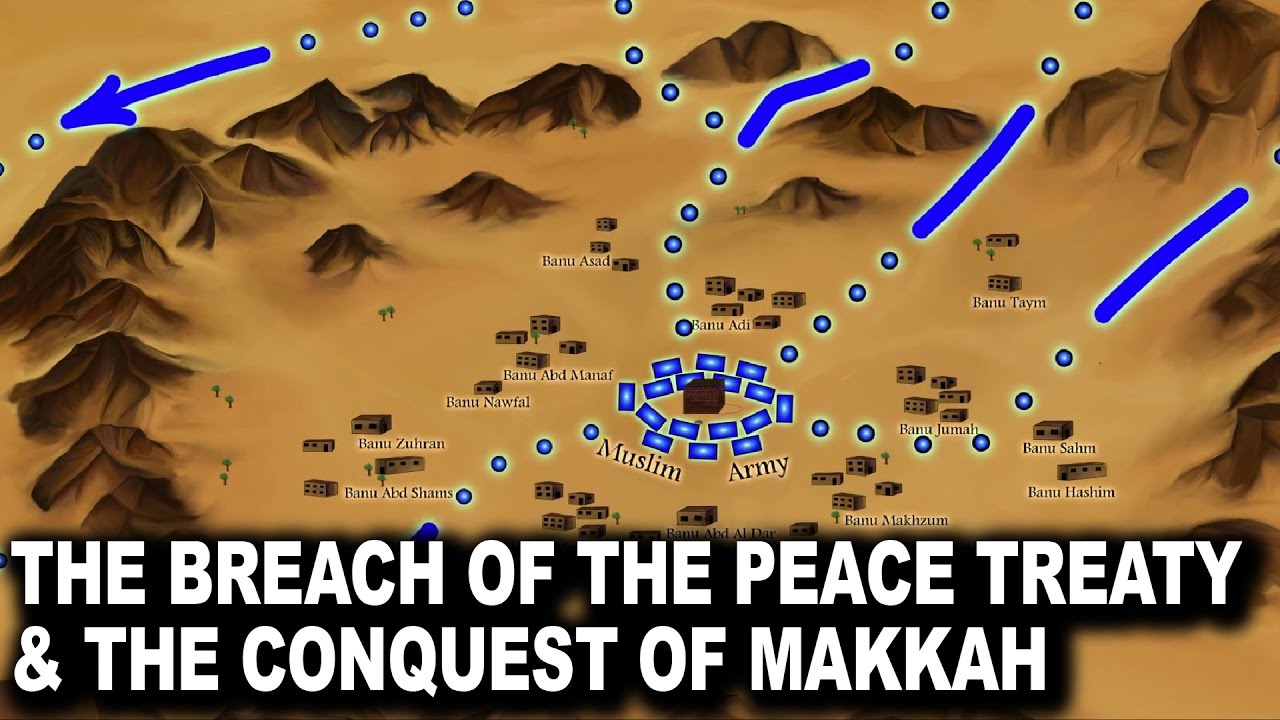 “Indeed, Allah was pleased with the believers when they gave the Bai’ah (pledge) to you (O Muhammad) under the tree: He knew what was in their hearts, and He sent down As-Sakinah (calmness and tranquility) upon them, and He rewarded them with a near victory” [Al-Fath, 48: 18].