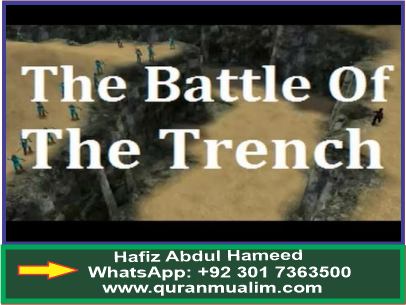 Battle of the Trench (Ghazwae Khandaq)

After settling down in Khaybar, the Jews planned an all-out war against the Muslims. Their leaders, Salaam bin Abil Huqayq, Hayyay bin Akhtab, Kanana bin Al-Rabi’, and some others went to Makkah and invited the Quraysh to join hands with them to annihilate Muslims. The Quraysh were too eager to accept such a proposal. After having a word of support from them, the Jewish deputation went to the Ghatfan tribe and won their alliance on the promise of giving them half of the produce of Khaybar permanently. Banu Asad, a tribe already in alliance with the Jews, were also invited to join them. The people of the Banu Sulaym tribe were relatives of the Quraysh, and so they agreed to support them too. The Banu S’ad tribe was an ally of the Jews. The Jews also persuaded them to support them. Thus a huge military alliance was formed, and an army of more than 10,000 soldiers advanced toward Madinah. (Fathul Bari, 7: 393, Ibn Hisham, 2: 214.)

Hearing the news, the Prophet (PBUH) called his Companions for consultation. Hazrat Salman Farsi® was from Persia and was acquainted with the device of digging a trench around a town to fight a war from the safe precincts. He argued that under the present circumstances it was unsafe to meet the attacking army in the open field and suggested that the Muslims should gather all their military might at a safe place and dig a trench around it. All the people liked this suggestion and so preparations for digging a trench around Madinah started. 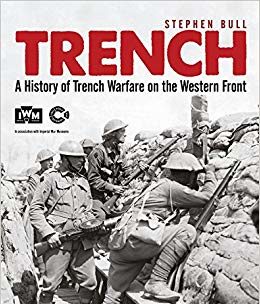 There were houses and date groves (Nakhlistan) on the three sides of Madinah which provided natural protection to the city. Only one side, the Shami side, was open and exposed. The Prophet ((PBUH)) decided to dig a trench there with the help of 3,000 Companions and started the work on the 8th Zulqa’da of the fifth Hijri. He himself marked the land and gave to each group of ten persons a piece of ten yards to work on. The trench was to be five yards deep. The work was completed in six days. (Fathul Bari, 7: 393-94, Ibn Hisham 2: 216-17.) When the Masjide Nabawi was being constructed, the Prophet ((PBUH)) had worked as a laborer. Now, again, he was digging a trench with his Companions. Those were the nights of winter and they had been starving for three days. But the Muhajireen and the Ansar lifted buckets of soil on their back and sang in enthusiasm:

We have pledged a solemn covenant at the hands of Muhammad, To remain steadfast in Islam forever.

The Prophet ((PBUH)) was also lifting the soil with his Companions. Dust had settled down on his belly, and the following verses were on his lips: (By Allah! Had it not been for His favor, we would not have received guidance,

And we would neither be paying Zakah, nor offering Salah;

When the Prophet (pbuh) said the word ” 2 ;'”abayna, his voice rose higher and he repeated the word twice. He also prayed for the Ansar at this point. He also said these words:

(O Allah! There is no good except the good of the Hereafter, Be blessed the Ansar and the Muhajireen.) (Sahih Al-Bukhari, Kitabul Maghazi, Bab Ghazwae Khandaque.) 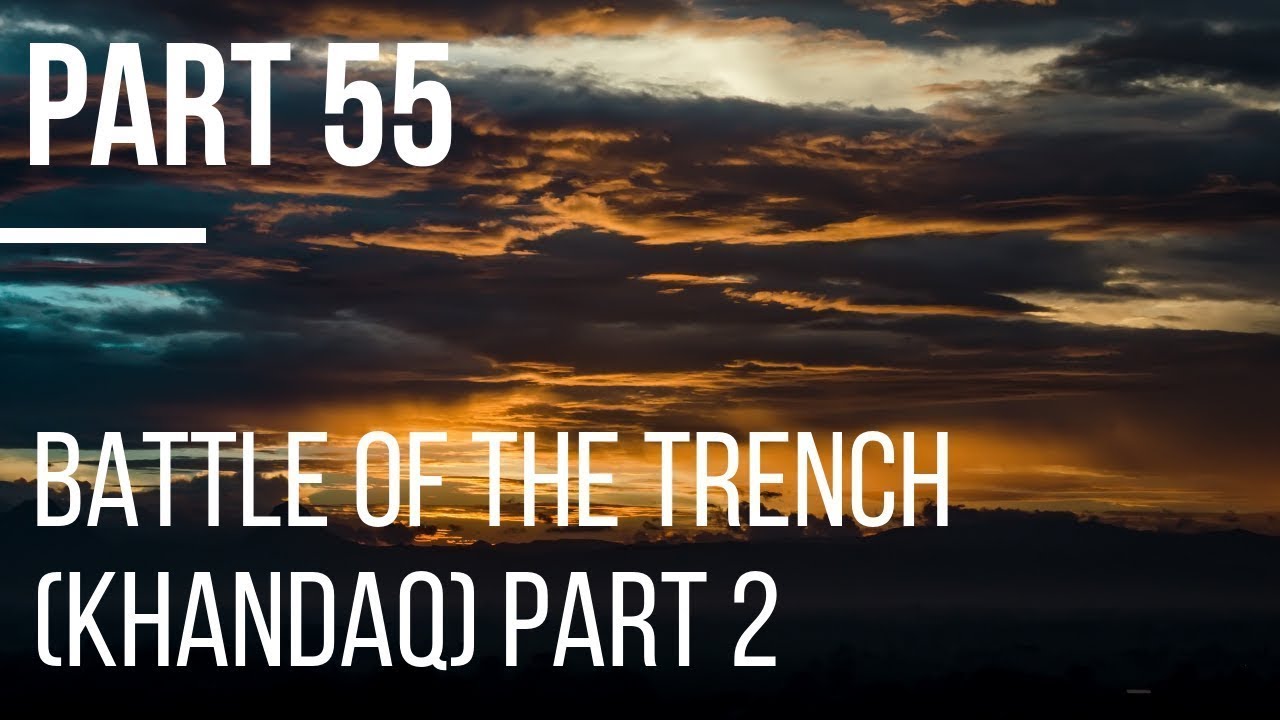 While the trench was being dug, a hard rock came in the way. The Companions tried to break it down and remove it, but in vain. The Prophet (pbuh) came to the place. Although he was exhausted with the starvation of three days, he hit the rock with his axe and the rock was broken into pieces. (Sahih Al-Bukhari, Kitabul Maghazi, Bab Ghazwae Khandaque.)

When the lines were formed, the mount of Sila’ was taken at the back. The women were sent to the safe forts. Salma bin Aslam was deputed with 200 Muslims to guard so that Banu Qurayza might not attack from that side. (Seeratun Nabi, 1: 422.)

The Banu Qurayza tribe of the Jews was still aloof, but Banu Nazeer tried to influence them to side with them. Hayyay bin Akhtab, the leader of Banu Nazeer and father of Ummul Mo`mineen Hazrat Safiya, himself went to Ka’ab bin Asad, the chief of Banu Qurayza. Ka’ab declined to meet Hayyay bin Akhtab. But Hayyay sent him the word that he had brought with him a very large army, consisting of men from the Quraysh, in fact, from the whole Arabia, who was bent upon annihilating Muhammad ((PBUH)). He added that such an opportunity was not to be missed, as Islam was surely going to be wiped out from the country forever. Ka’ab was not ready yet and said, “I have always found Muhammad true to his word, and to dishonor a treaty with him is not gentlemanly.” But Hayyay somehow convinced him to join the military alliance against the Muslims.

When the Prophet ((PBUH)) received the news that Banu Qurayza had disregarded the treaty with the Muslims, he sent S’ad bin Mu’az and S’ad bin ‘Ubada to verify it. He also instructed the two Companions that if the news of Banu Qurayza’s uprising was true, they should report him in code words so that others did not follow and were not disheartened. When the two Companions visited Banu Qurayza and reminded them of the treaty, they replied, “We do not know who Muhammad is and what treaty you are talking about.” (Seerat Ibn Hisham 2: 220, 224.)

The addition of the soldiers of Banu Qurayza further increased the strength of the allied army of the disbelievers. The army, 10,000-strong consisting of the Quraysh, the Jews, and the Arab tribes, moved from three sides to Madinah. The attack was so severe and massive that the land of Madinah trembled (Seeratun Nabi, Allama Shibli Nomani, 1:423, the number of soldiers mentioned in books of Seerah and Fathul Bari is ten thousand.). This situation has been described by the Qur`an in a picturesque way in the following verse:

“When they came upon you from above you and from below you, and when the eyes grew wild and the hearts reached to the throats, and you were harboring doubts about Allah.  There, the believers were tried and shaken with a mighty shaking” [Al-Ahzab, 33: 10-11]. (It is mentioned in Sahih Bukhari that these verses were revealed about the Battle of the Trench. Kitabul Maghazi Bab Ghazwatul Khandaque.)

There were a number of hypocrites among the Muslims who apparently professed faith in Islam, but when faced with the severity of season, dearth of provision, continuous starvation for days, vigil at night, and fear of a large enemy of the enemies, they decided to desert the Muslims. They went to the Prophet (pbuh) and asked him for permission to return to the city as their homes were unsafe. (Zadul Ma’ad, 3:272, Seerah Ibn Hisham, 2: 222. ) It is recorded in the Qur`an:

But the sincerity of the Companions shone brighter in the face of the severity of the situation.( Tafseer Qurtubi, 14: 157 )  The Qur`an mentions: 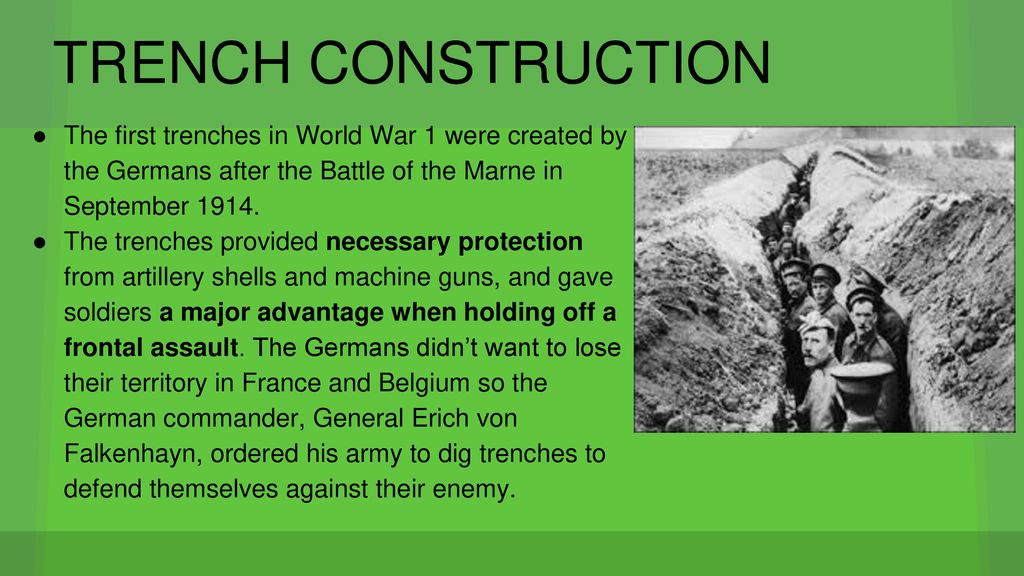